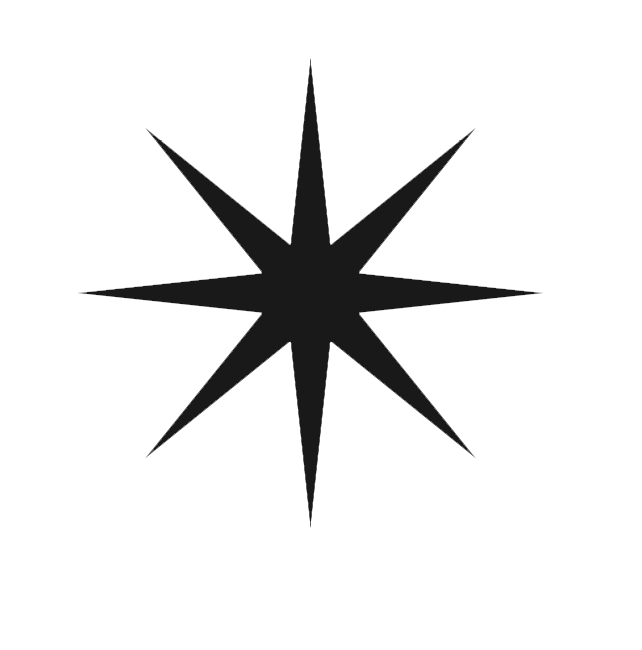 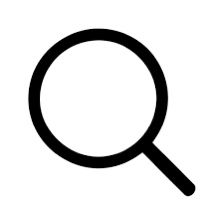 The project is the redevelopment of an unused architecture in order to convert it into a domestic chapel. A new sacred place dedicated to the contemplation of the Moon and its protective goddess: Diana. The Moon is one of the oldest symbols of humanity; it represents the excellence of feminine models, The mother of the universe. its fundamental qualities are receptive: the moon reflects the light of the sun. The moon symbolizes intuition and clairvoyance. Sensitivity is also an integral part of this magic star which will open the doors of the invisible but also of the unconscious and intuition. There was a time when the feminine and her guiding light, the Moon, were all-powerful. In these peaceful, agrarian societies, primal feminine powers like emotion, sexuality, creation, communion with nature – were honored. And the moon, which waxed and waned in predictable cycles, was a symbol for the birth, growth, death, and renewal of life on Earth. 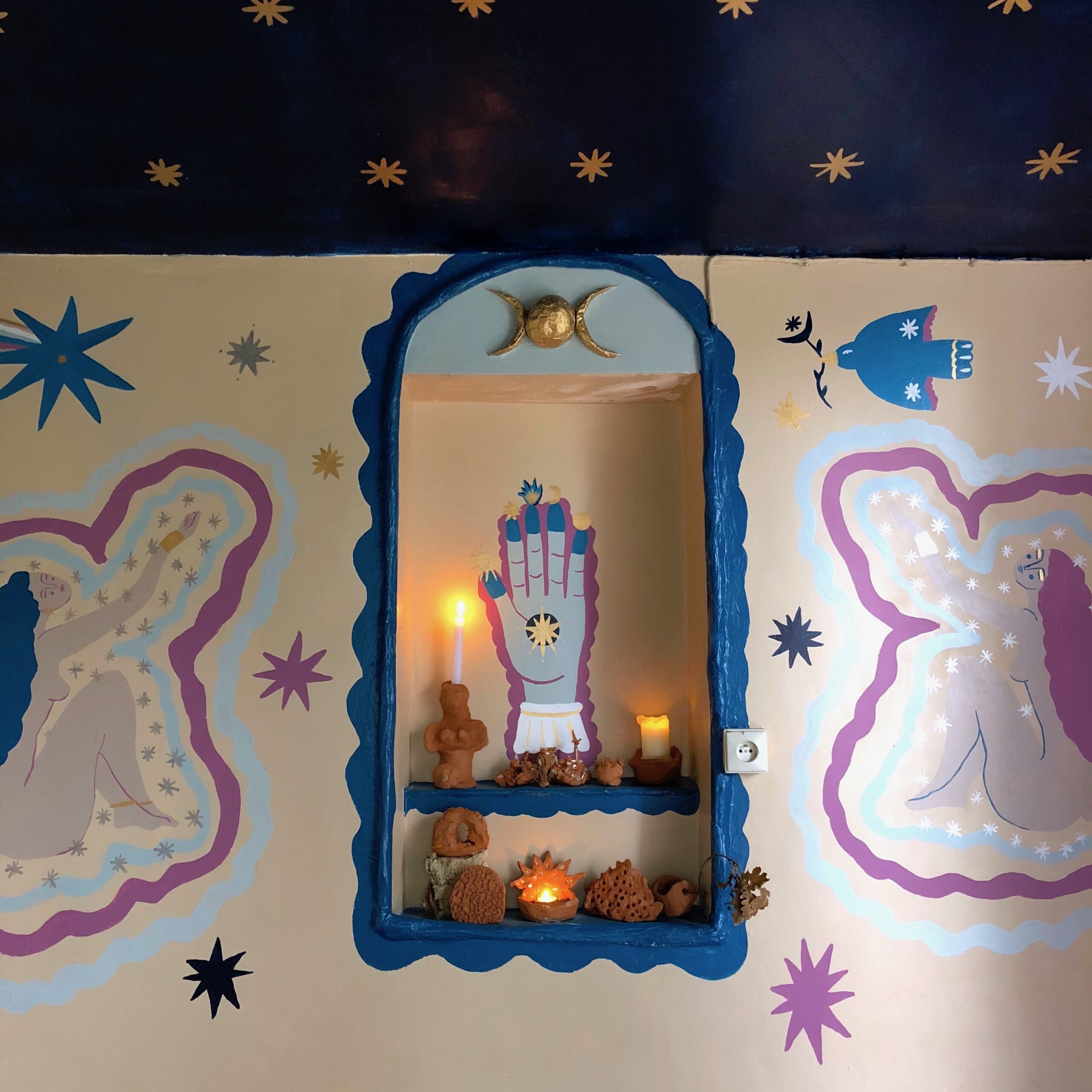 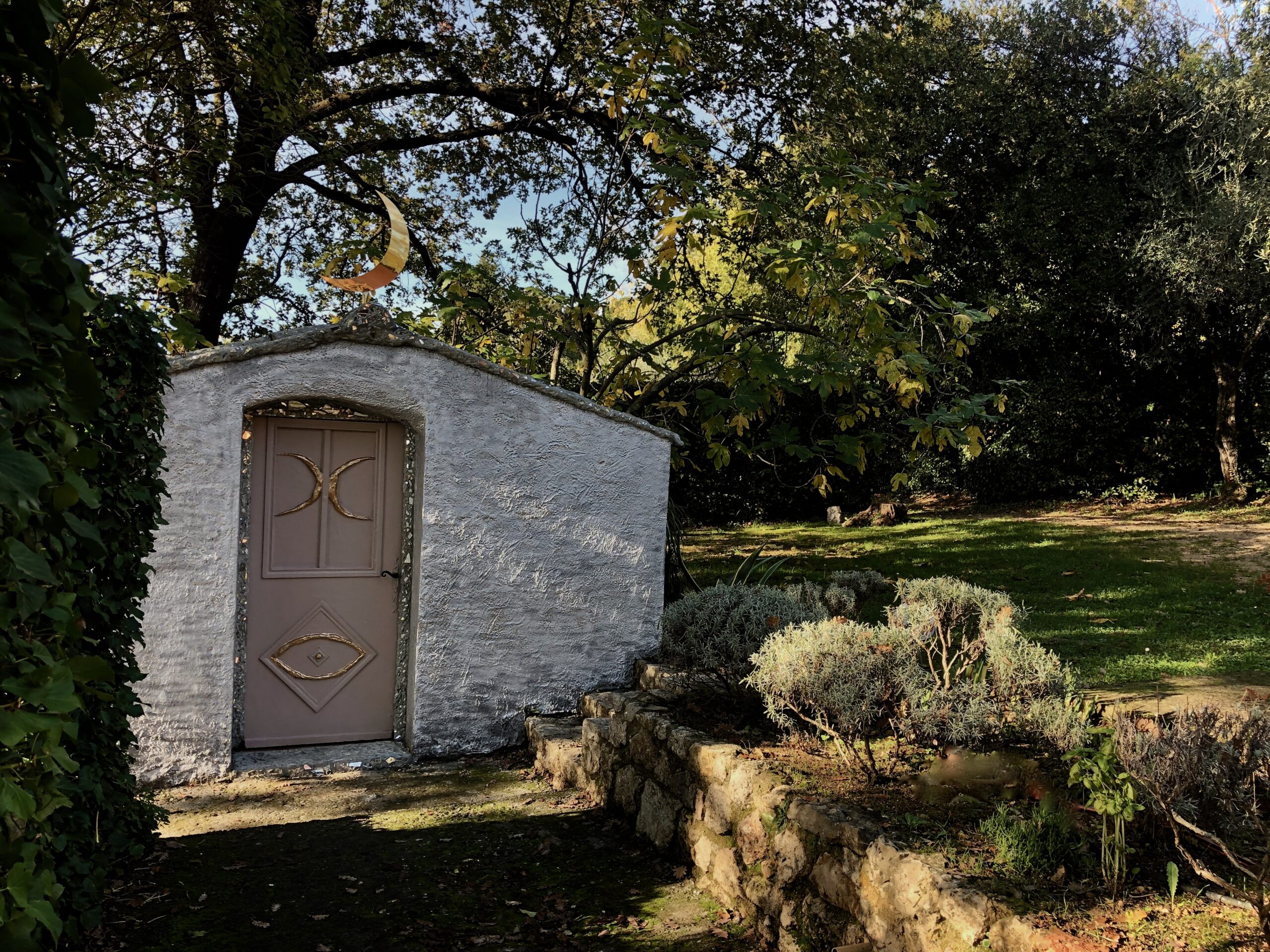 CRADLE OF THE NIGHT,

WITHOUT ATMOSPHERE, YOU CAN’T BREATHE,

HOW WILL YOU SURVIVE?

A MYSTERY FOR ALL.

YOU TURN ON, YOU TURN OFF, NOT WHEN YOU WANT.

DOMINATED BY YOUR ONLY THOUGHT, 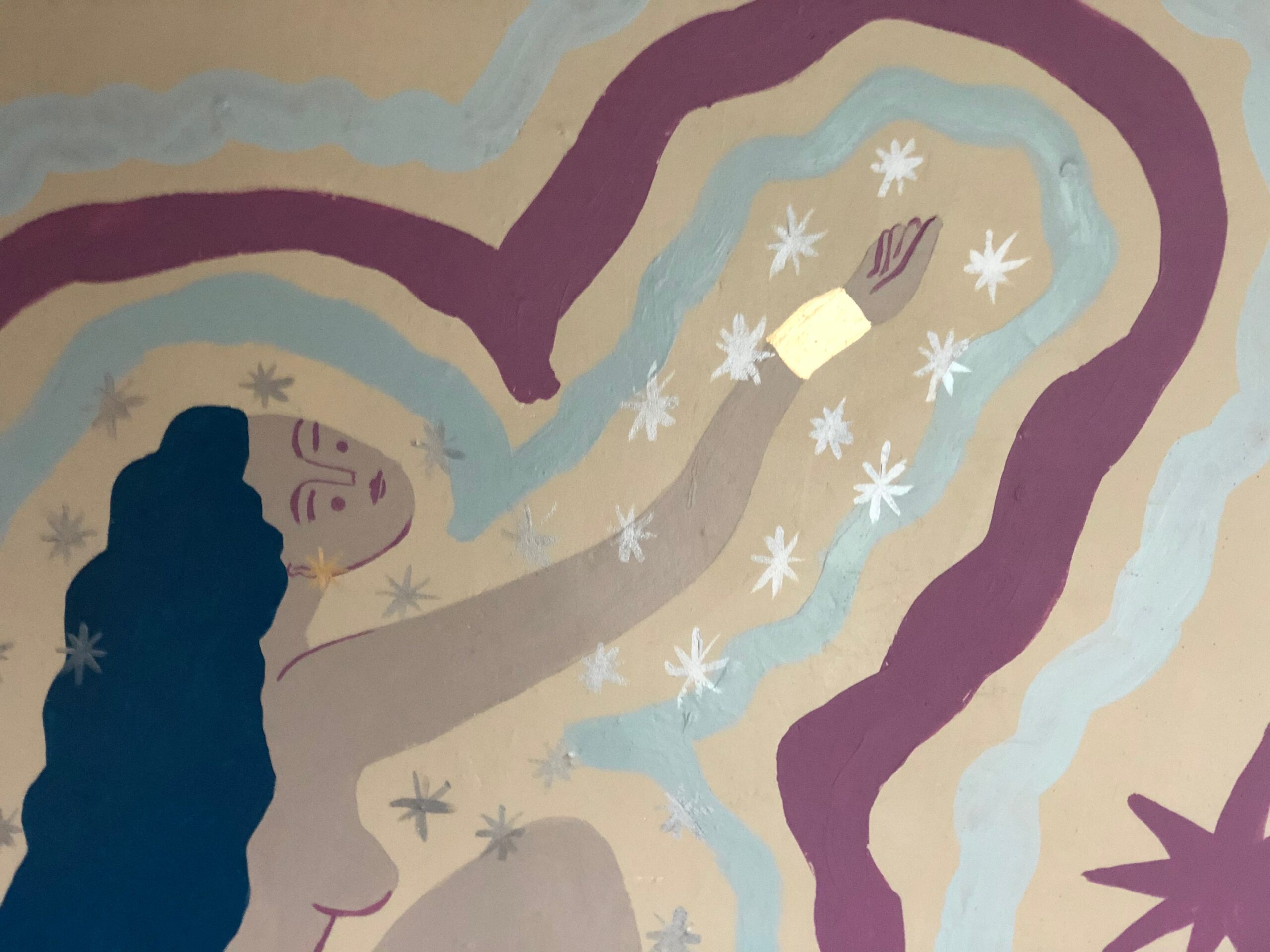 The Moon is thought to have formed about 4.51 billion years ago, not long after Earth. The most widely accepted explanation is that the Moon formed from the debris left over after a giant impact between Earth and a hypothetical Mars-sized body called Theia. New research of Moon rocks, although not rejecting the Theia hypothesis, suggests that the Moon may be older than previously thought. The Moon is in synchronous rotation with Earth, and thus always shows the same side to Earth, the nearside. Because of libration, slightly more than half (about 59%) of the total lunar surface can be viewed from Earth.The nearside is marked by dark volcanic maria that fill the spaces between the bright ancient crustal highlands and the prominent impact craters. After the Sun, the Moon is the second-brightest celestial object regularly visible in Earth’s sky. Its surface is actually dark, although compared to the night sky it appears very bright, with a reflectance just slightly higher than that of worn asphalt. Its gravitational influence produces the ocean tides, body tides, and the slight lengthening of the day. 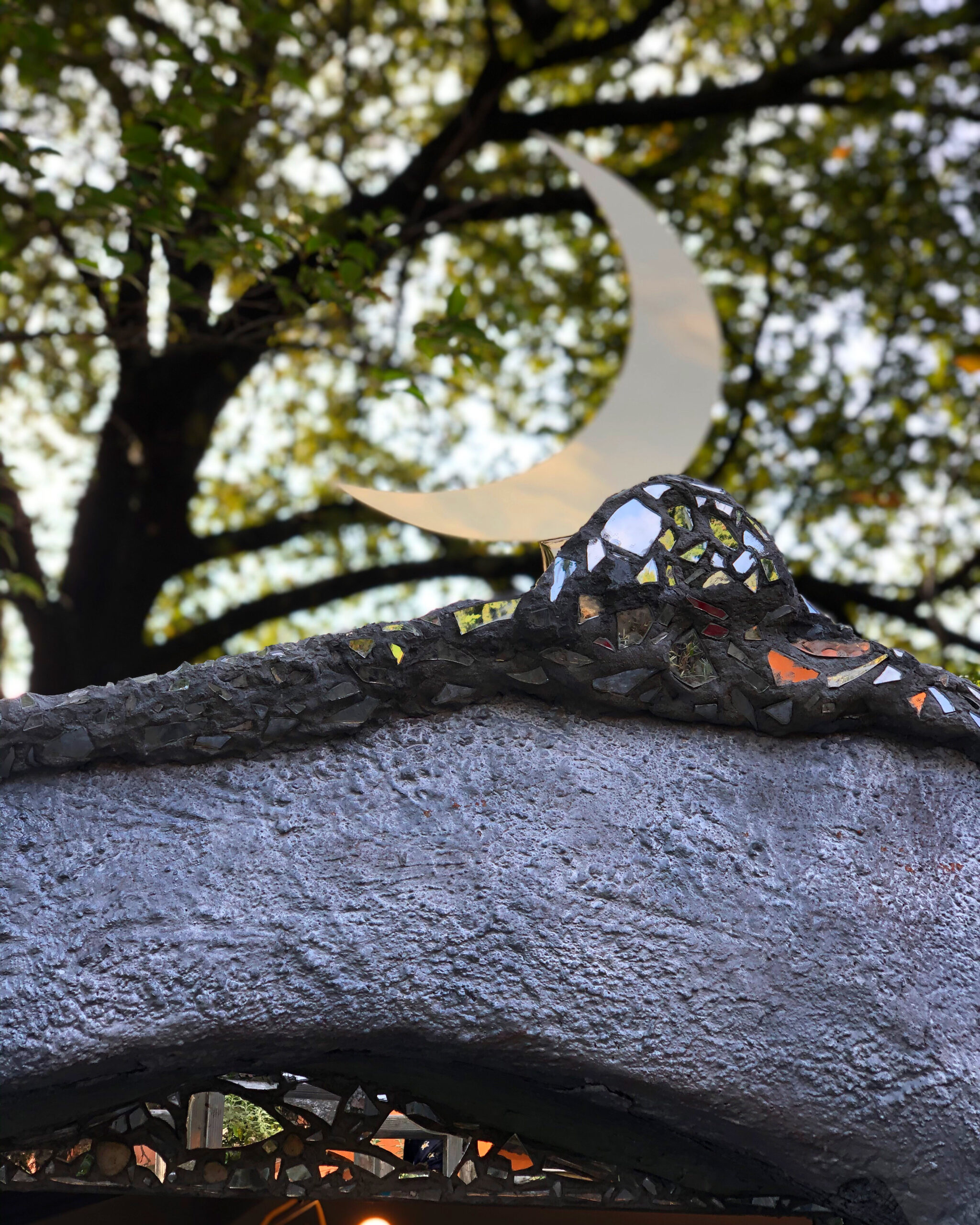 Clorophilla is a versatile artist and illustrator who lives in front the sea. SHE is  the artist chosen by valentina guidi ottobri  to paint the chapel’S INTERIORS. After Miro, Cocteau, AND  Picasso a new sacred place HAS BEEN CREATED AT the FRENCH Riviera. Magic and alchemy. Her world is an imaginary one by magical creatures, hearts ON fire, falling stars, ex voto, halos where holy and unholy come together and there’s no bound between different arts. FOR THE MOON CHAPEL ClorophILLA’ s paintures ARE INSPIRED by Diana, THE goddess of hunting, virginity, archery, woodS, and the Moon, during the religious syncretism of the imperial age she was further identified with other oriental female deities.

In a world that has everything, where things and words accumulate, the gallery offers a new form of animism that invites us to interact differently with the objects and spaces that populate our everyday life. 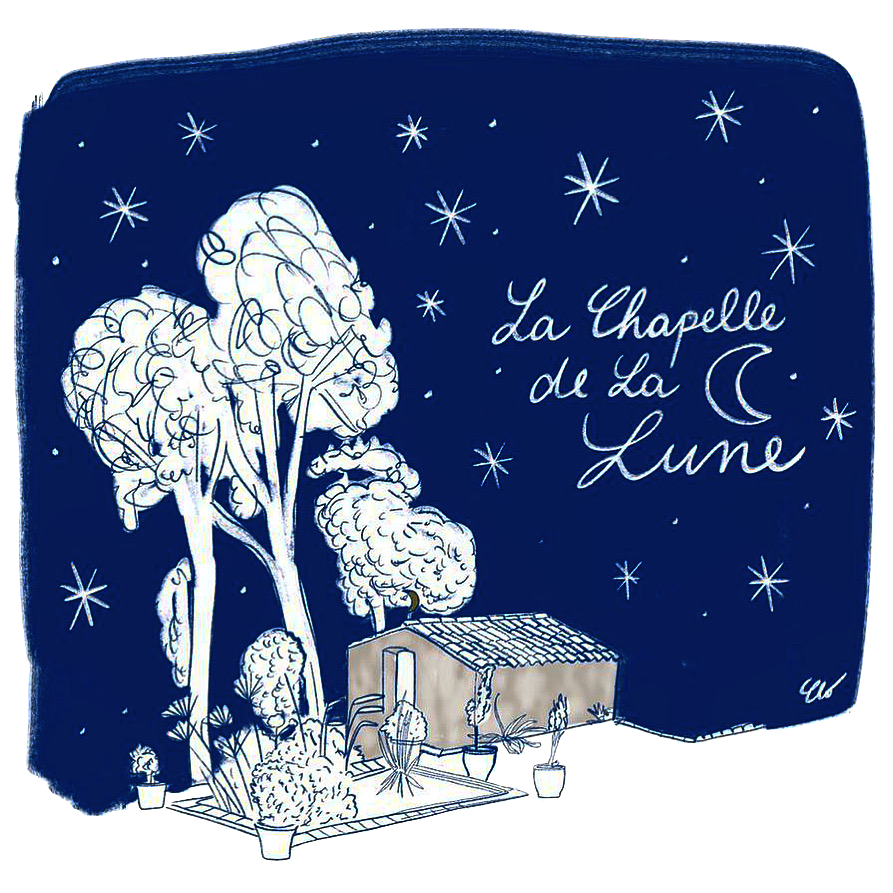